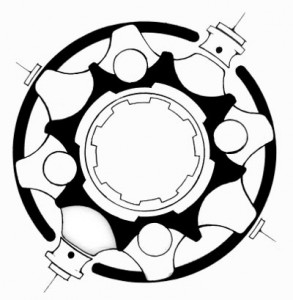 If you think that in times of crisis the best thing you can do is wait, with crossed arms and an empty gaze, for a new miracle that will save us from the abyss where we have fallen, you are unlikely to be interested in reading these pages any further.
The economic crisis is just another effect of a system consecrated to collapse, a system that wants us to be scared and resigned, one of the many ghosts that terrify us, neither the first nor the last for sure.
From time immemorial we have wandered among the waste dumps that make up the exhausted geography of a world which is raped every day by progress (another magical world everybody should bow to, until their backs break) – a progress made of death, exploitation, experimentation, devastation and “necessary” reconstruction – and all along we have looked for spare
parts with which we could rethink our lifestyle.
Just as rust modifies metal scraps, giving them new textures and deep warm nuances, our imagination interacts with reality and changes it. The stories you will find in these pages, from the surreal and delicate Licheni [“Lichens”, by pinche] to the claustrophobic nightmare of Occhio sbarrato fiero [“Fierce wide-open eye” by reginazabo], up to the very womb of the codes of law that is depicted in Gravidanza asociale [“Antisocial Pregnancy”, by Alberto Prunetti] (just to mention a few), are all about our present, and challenge the reader to identify it in the various phases of its disfigurement.
A path of signs and designs that follow the metamorphosis of everyday life, translating it into another time-space (weather past or future), and projecting it into another dimension – the dimension of possibility. It is here, in these immaterial transit zones, that our utopias find their place, that our desires take form and voice, that our fears are revealed, because we need to confront and, perhaps, exorcise them. We believe that the reality that surrounds us is not the consequence of an inevitable fate, and that we can therefore distance ourselves from it, laughing at it while taking it seriously, in order to mock its ironies and to build a new reality, starting to imagine it as we keep tilting at nuclear fusion windmills.

Before we close this editorial, we would like to include a manuscript we have found in an old factory that in the meantime has been razed to the ground.
It may have been a steel mill, but we cannot tell for sure, because now it is but one of the many heaps of debris scattered all over our suburbs and our imaginations.

We are the generation of the killed future.
Burnt with phosphorus bombs, poisoned by exhaust gases, starved by a multinational corporation, smothered by a bank, used as a guinea pig by a pharmaceutical industry.
Time, together with our future, has stopped at Nagasaki.
In a strange dimension called “crisis”, “depression”, “negative trend” or “recession”, we live with the certainty that the morsels of future that remain depend solely on ourselves. No pensions, no welfare, no permanent jobs. Governments have nothing else to show but their teeth, and as days go by, the shows of power politics seem more and more unreal.
But after all the future has stopped at Nagasaki and it can restart from there. We will create buyers’ groups to stop eating poisoned food, we will cook with renewable energies, we will use self-management as a lens to watch a newly drawn horizon.
Let the dance begin, let us start rebuilding on ruins – the steps we will take from now on will determine our fate.